Our ferry arrived in Venice early in the morning, almost 24 hours since leaving Igoumenitsa. We'd spent that time curled up in our (Camper Special Bonus!) cabin, playing Free Civ, snoozing and generally trying to avoid the fact we were trapped on a rather dull boat for an entire day.

We needed to stretch our legs and do something different -and Venice was right there, waiting to be explored. 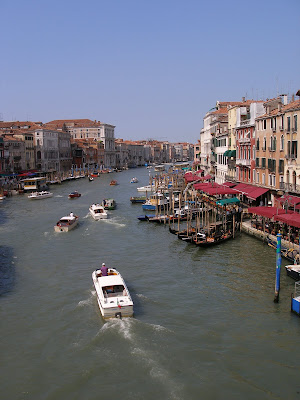 Driving off the ferry, our first problem was parking - in a congested island city, famous now for its tourism and lack of streets, where do you put a van? Answer: just over the bridge off the island, in the public car parking, where the council has installed signs to say you must pay but hasn't yet got around to installing the machines to do so. And after five minutes on the bus, we were back in the canal zone with all the other tourists, cameras in hand.

We started by following the crowds to Piazza San Marco (of course), enjoying the canals, winding laneways and old buildings along the way. Once there, we ditched the tourist trail and spent most of the day just a little lost.

We quickly worked out that buying an espresso and drinking it at the bar (E1), before ducking upstairs to use the cafe's loos, is far better value than using a public toilet (E1.50), and as entrance to any one of the museums on Piazza San Marco gives you entrance to all the others, there's no point in waiting at the most popular Doge's Palace to get in ... better to check out the Correr first and waltz past the line to the Doge's fine lodgings once you have your ticket.
We thought about taking a gondola. We could be one of "those" couples, sitting romantically in the love seat being seranaded in Italian by someone wearing a straw hat and stripey shirt. But does that sound like us? Not really. Instead we took a break from walking around in an alley that ended in a canal, and we sat and watched an entire log jam of gondolas float by ... noticing that the only tourists enjoying themselves were the ones with a bottle of prosecco, that straw hats are out of fashion and that there's nothing romantic about being stuck on a small vessel with an accordian when the player only knows one song, we were pretty pleased with our decision to just walk around town. 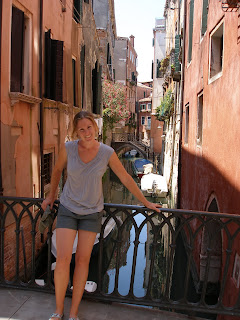 What else? We bought take away pizza for lunch, eating it under one of the many small bridges and watching more boats of many different shapes and sizes go by. We found the residential area, looking dilapadated and perhaps a little empty, but providing a fascinating glimpse into how one does laundry here (how much falls of the lines and ends up in the water?). Although we'd be heading in the right direction, we never really knew where we were and often met with dead-ends ... but that was OK. 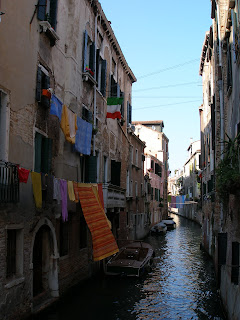 And in the evening, after dinner in a small courtyard restaurant, we joined the students for a plastic tumbler or three of "spritzer" - Campari, white wine and soda, on a hot evening, standing on yet another bridge over yet another canal.

Email ThisBlogThis!Share to TwitterShare to FacebookShare to Pinterest
Labels: Italy, Life in the van, Touristing