Olympos Beach is famous for its “tree houses”. Whilst here and there there is a cabin perched a few metres off the deck, near a tree or with a tree running through it, these cabins are supported by wooden beams rather than by the tree itself. We don't really think they qualify as “tree houses”. The vast majority of people (us included) stay in a wooden bungalow, enjoying the breakfast (freshly cooked omelette) and dinner (rice and ratatouille, tasty but monotonous) that is included. 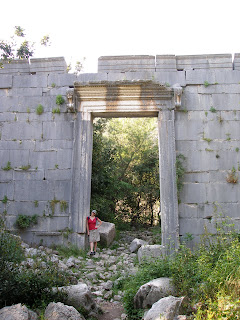 Before you can hit the beach, you must pass through the Lycian (then Roman) ruined city of Olympos, with scattered a necropolis of large stone sarcophagi, little theatre, Roman baths and – most spectacularly – temple door. Apparently this was the home of the first Olympic games, with men running with a torch lit from the nearby Chimaera across the beach to the city (although a few places make that claim!).
Later it was a pirate hideout, and a castle on the headland was built (or restored?) by Genovese knights during the Middle Ages. There's an entry fee for this, meaning you have to pay to get to the beach, but once you've bought your ticket on the first day, thereby supporting the preservation of the ruins, it's pretty easy to walk up through the bush on the other side of the river and get to the beach for free.
Oh, and did we mention there's climbing here? And despite being on limestone, it was a completely different style to Geyikbeyiri – with one crag, Cennet, being a flat, vertical wall, with tiny crimps and scattered pockets (some better than others!), and the surface in places so smooth it was as slippery as glass. The best climbs here were in the high sixes and sevens … most of the time, Jen decided it was best to be photographer. 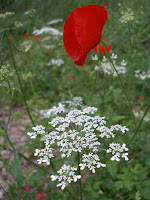 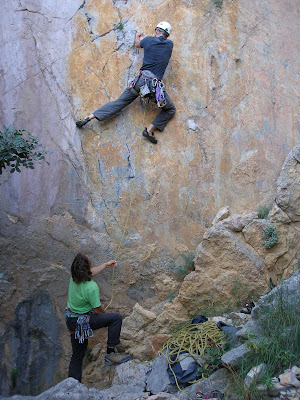 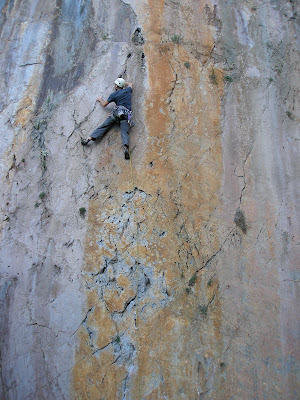