Well … perhaps we spoke too soon about driving in Turkey. 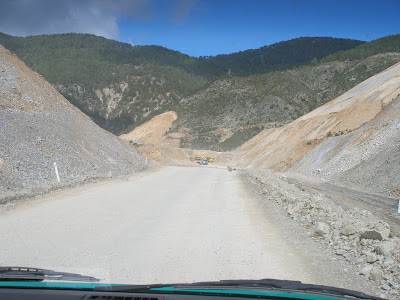 It seems the road between Mersin and Alanya is being upgraded from single carriageway to duel, and in the meantime, much of it is unpaved. And you're sharing it with the massive trucks needed to undertake such an engineering effort … did we mention that it's a spectacularly hilly and forested landscape, with the steep hills meeting the clear Mediterranean Sea? Every now and again there would be an agricultural centre, with fresh fruit for sale, or we'd drop down out of the hills to an empty strip of beach. There were castles and abandoned Roman cities to explore, too. 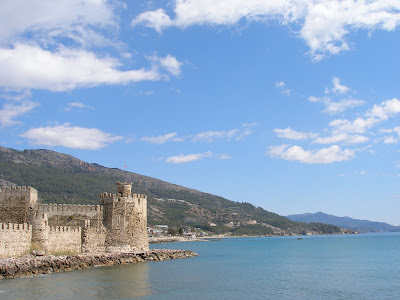 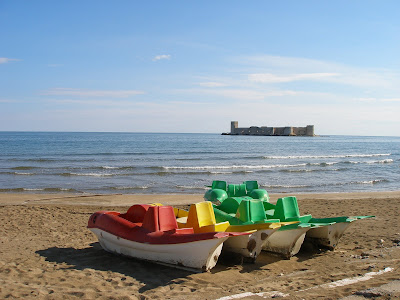 And then we noticed the local constabulary waving their flag … it would not have surprised us to hear that we had been done for speeding, as we're still not entirely sure what the speed limits actually are in Turkey. We showed the officer first our drivers licence, then our registration papers – but this is not what he wanted. He indicated we should get out of the van, so we did – and then he lead us around to the front of Fred.
Where a yellow and black Dutch numberplate once was, there was only a cracked, black frame. Whoops. The bumpy roads in the dark had claimed a victim. “No problem!” said the officer, being his only words in English thus far, and so with a bit of cardboard, a black pen and some tape, we mocked something up and were on our way.
Drama Number Two occurred a little later. Apparently it was a bigger ditch than expected, or Fred could handle. Whoops again. But rims are easy to fix, or replace if necessary, right? And why would you call it a bumper if it wasn't meant to be, well, bumped occasionally?