Voie des Dalles - or, the Way of the Slabs

The forecast for the weekend was perfect. Hot, sunny, a slight breeze - and then a massive thunderstorm sometime on Sunday evening. It was time to do something longer and make a trip out of it. We settled for a climb called "Voie des Dalles" - the Way of the Slabs! - on a large buttress just over the hill from the Index chairlift, called Pouce. 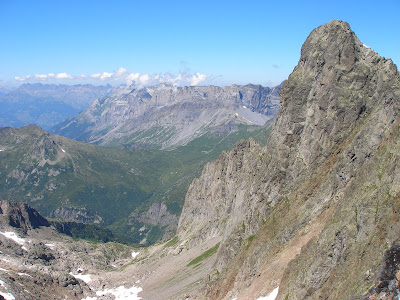 We set off a bit later than usual but this wasn't really a problem, we thought, as we had all day and all night. No need to rush for the last chair back down like most other climbers, after all! But the way was still slow - the gully up to the col from the Index chair was loose, with many rocks coming down, and our bags were heavy with climbing and bivvy gear. We passed a group of British climbers who had decided to turn back after seeing the descent on the other side - this wasn't very encouraging.

At the col, we left the bivvy gear behind and pressed on.

The Brits were right: the descent wasn't pretty. It was covered in large chunks of part-frozen new snow, and was a slippery scramble over sliding rocks. We did find several places to rappel down, trying not to dislodge anything on top of us as we went, and we eventually passed it. But what really cheered Jenzing up was being able to bumslide down the snow on the final ramp - bumsliding is second only to ice-cream at improving her mood, and if there were more snowslopes and ice-cream vans around, Jenzing would be an extremely happy little Vegemite.

(Interestingly, the next day the descent looked far more pleasant as the sun had got rid of most of the snow on the rocks and it would have been much easier. But maybe the bumsliding wouldn't have been as comfortable.)

And then we were there! At the base! Ready to go, ready to climb! And it looked spectacular - if a very long way up! There was a party far ahead of us, on another (much harder) route that we could just see, and some more British climbers getting a bit lost on what they thought was Voie des Dalles but was actually something else (and also much harder). We tried to help the Brits out a bit, and explained what we'd hoped to do, before heading around to the right side to get on the easier starting pitch.

The guidebook clearly tells us that there's no gear on this first, easy pitch and there's a bolted belay at the end. Jenzing lead off without reading this information - so up and up she scrambled, but very slowly! She found one or two bits of gear, but nothing terribly comforting, and always looking for more but of course not finding anything. When she thought she'd gone far enough, to a little corner with a few fissures, she set up a pretty awful trad anchor. Nevertheless, Mark came up without a hitch and fixed it up - and only then we saw the bolted belay, right there only a few metres away! Jenzing's confidence went from slightly shaky to completely shattered, and there was no ice-cream to cheer her up, so with a mere 14 pitches to go it was decided that really Mark should do all the leading from then on.

Mark then got a little lost on the next pitch, being lured too far to the right by an old piton and consequently taking a much harder and less-protectable line. We'd been slow to get started in the morning, slow on the walk in and now slow on the first two pitches. Hmm!

Fifteen pitches for 350 metres of climbing suggests to us that it's going to weave back and forth, so drag will be an issue - or if not, you can link pitches. Thankfully with double ropes, the latter was the case, so soon we were moving properly and setting a respectable pace, and were far above the ground below. Although we still had many change-overs at belays, they became smoother and more efficient. Oh, and we started checking the guidebook frequently to avoid any more route-finding errors!

True to it's name, most of the climbing was on slabs, following the easiest line up the face and arrete on the right-hand side of the buttress. Generally it was straightforward stuff on fairly good rock, and tricky bits could be "French-free'd", in the interests of expediency if necessary. It was just good fun and lots of it - lots of pitches of climbing on sun-warmed rock and a brilliant view across to the Lacs Noir, and then up to Mont Blanc shining on the other side of the Chamonix valley.

The route was listed as "partly protected", and we'd bought a bunch of nuts and a few friends along. There was the odd bolt, in places where it would have otherwise been hard to naturally protect, many old pitons of all shapes and sizes bashed in along the cracks, and the belays were almost always two bolts joined by tat or a piton/bolt combo.

Jenzing did eventually lead another couple of pitches, and we swung leads up some easy ground at the top. The climb increasingly became a scramble, and the rock did get softer and more likely to fall. We think we may have popped off route here as well, taking the dreaded early exit from the chimmney that is warned against in the book, but no harm came of it (as long as you're prepared to build a trad anchor!).

This was the view from the top: 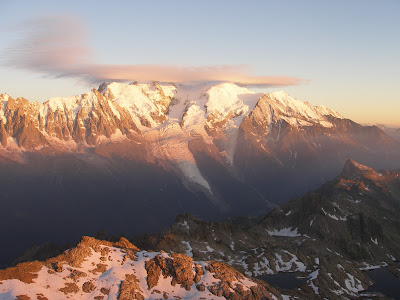 
It also means you walk down in the dark. In this case, it means you walk down slippery, ice-and-snow-covered rocks that are balancing on a narrow ridge with a dramatic drop-off on either side. We had headtorches and the moon rose, and we stayed roped up and moved together, scrambling slowly and carefully, but we were tired, it was dark and the terrain was not as easy as we'd hoped.

It felt pretty great to finally see the bivvy spot, pop the tent up and fall asleep.
Posted by j at 05:08