We have already mentioned that we found the Refuge du Requin very comfortable and welcoming … we had intended to stay for only three or four nights, and carried in only that amount of food. But in the little kitchen provided for those too cheap to buy meals, the left-over food box contained enough pasta, dehydrated potato, powdered milk and stock cubes to stretch our provisions to five nights – well, with a few supplements from the friendly hut wardens too. 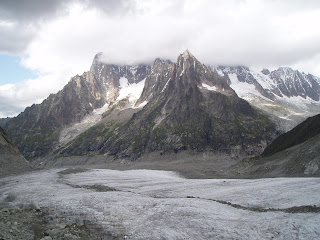 So what did we do there? On the first day, feeling like something “straight-forward”, we headed towards Congo Star. Michel Piola, the author of our guidebook and climber responsible for setting up many new routes in the area, states explicitly that “Nuts and friends not needed” for this route. He describes with some angst the re-equipping of the route by a previous Requin hut warden against the wishes of the original ascentionists, who presumably wanted to keep the line as predominately trad.

However as we started to climb, we realised that Mr Piola obviously hasn't climbed the route since its infamous re-equipping. Yes there are a few bolts around – but we were very glad on the first few pitches to have a few camalots and nuts with us: if you were only to rely on the bolts, it would be horrendously and dangerously run-out! As it was not turning out to be as straight-forward as we'd hoped, and finding the third pitch still wet from the previous days' of rain, we decided to pull the pin and rappel off.

The next day, we headed up towards the beautifully named “L'Eden de la Mer” (The Eden of the Sea). Thanks to the retreating glacier, it took us a while to find the start … an extra pitch of easy climbing has been added onto the bottom of the route, where once you should have been able to walk up the ice – sadly, not that uncommon these days! But we soon knew where we were heading and were enjoying some fabulous granite in the sun. 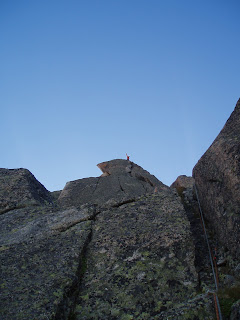 We didn't follow the route exactly, however. There are some bolts on it, and the rest uses natural protection, but in many instances it seemed to us that the bolts took the climber a few metres out onto harder, smooth slabs and away from the easier and interesting cracks which for the most part took good gear – so we opted for the easier line and didn't always clip the shiny hangers. Again, Mr Piola's guidebook lead us astray – he clearly shows the line of the climb going to the left of a large buttress (the buttress being one of the few features he has drawn on his topo), and we foolishly followed this rather than the bolt we saw on the right … this lead us into easy but broken ground, with enough rock spikes to create belays, but we doubt this was the direction of the original route.

At any rate, we shouldn't complain too much about the route, as the view from the top of the balanced boulder was quite lovely.
And what next? The Dent du Requin – the Tooth of the Shark – loomed above the hut … taking a rest day to sort gear, eat and chill out, we sussed out the possible routes. According to the hut warden, the best route by far was Voie Renaudie: first climbed on 4th August 1946 by Mr and Mrs Jean Renaudie, it has 570m of rock climbing but involves 900m of vertical ascent from the hut. An early start would be essential. 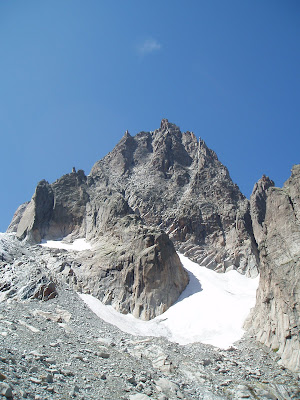 So, the alarm went off horridly early. With a group of Germans aiming to climb the nearby Chapeau a Cornes, we breakfasted, grabbed our gear and set off across the moraine. Hitting the ice, we popped our crampons on to head up what is described as a 35degree slope – the ice got steeper and steeper as we climbed towards the rock, and by the top we were joking that this was certainly an inaccurate geometry calculation! We may also have headed up the initial rock step the bonus-points way … (and still in crampons … urgh!)

So, all told, it took us a little longer than expected to hit the official starting ledge, marked with a large white arrow pointing the way.

Then the sun rose, turning the sky pink, then purple, then blue … 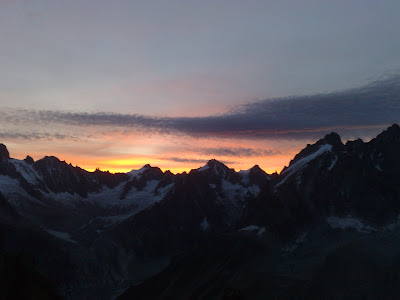 Ditching the crampons and ice-axes, we set off – moving together over easy terrain, with Mark placing a few bits of pro between us. We quickly covered the first couple of hundred metres this way, and after being so slow on the approach, we were happy to finally be making good time. The description of the route matched what we were seeing (funnily enough, it wasn't written by Michel Piola), and we reached Step 7: The Cliff Becomes Vertical. Changing into rock shoes, we started to pitch out the climb – and pitch after pitch of great granite climbing followed. Nothing too hard, but consistent, we climbed towards the summit ridge.

Hitting the ridge, we admired the steeper drop down on the other side and scrambling up and over the loose boulders, and through a small letter-box opening, we reached the step just below the block of the true summit around 2pm.

All that was left to do was abseil down … following Mr Piola's instructions, we found the abseil point and (foolishly!) did the long 50m rappel – despite the intermediate rappel points we could have used. Of course, the rope then got stuck and Mark had to climb all the way back up the rope to clear the jam – a simple sentence to describe two hours of hauling, pulling, flicking and pleading with the rope, not to mention the effort required to prussik up 50m of very stretchy, thin climbing rope. Oh, and then the fog suddenly came in – with snow, then sleet and rain to follow. We had enough gear to keep warm, but ropes are far heavier when wet than dry and even once we'd cleared the initial jam we had at least 16 more rappels to go. It wasn't until we were half way down that we found the promised abseil bolts, as we had been using instead an older, more slabby abseil line with slings around rocks – these were mostly OK, but some we backed-up with our own tat, and the terrain made us quite concerned we'd catch the rope again (which, thankfully, we didn't). All up, it was heavy and hard work, and we slowed down. We were back at the ice-axes and crampons far later than we'd hoped, and were even slower heading back to the hut.

Once finally at the hut, we were greeted with a warm welcome and the fire going … needless to say we slept well that night!