When we arrived at Aiguille du Midi on the cable car, it was pretty hard to miss Dent du Geant - the Giant's Tooth - across the Vallee Blanche.


And as we walked across the glacier to its base, it just kept looking more and more impressive. 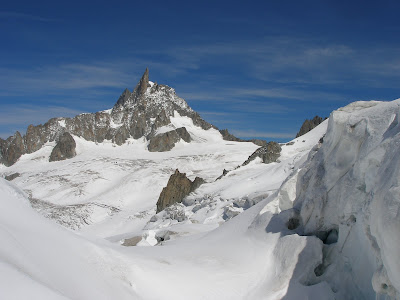 It's also meant to be quite a straight-forward route, well within our abilities - so it was something we were pretty keen to climb.

We camped on the plateau near the Refuge Torino, looking right up at the Dent. It took a bit of effort to eat something at this altitude - but a spectacular sunset and then the incredible number of stars overhead ... well, camping in the mountains is always pretty special. 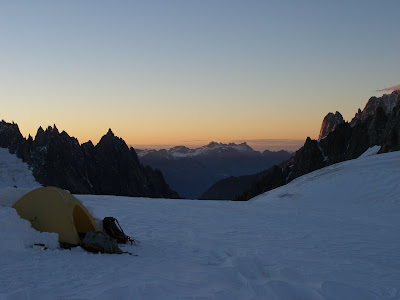 What was concerning, however, was the sheer number of people coming back down from the Dent. Team after team, even as it got late and dark - they just kept coming. We know it's a moderate and good looking route, right near a chairlift, and it was Saturday, and the weather that day had been great - but still! We asked one party, and the problem was simply too many parties - all climbing over and around each other during the day, and then all getting stuck at the top and having to wait for each other to rappel off to get down. It did not sound appealing.

After an uneasy night, wide awake due to the altitude and listening to the wind pick up outside, we decided against the pre-dawn start. Once the sun was up, we could see the clouds racing over the Dent - and quite a large number of parties already on their way up the hill in spite of it. So we waited, and had a leisurely breakfast.

However, with the news that the wind would drop that afternoon, around 11:00am we decided to just go for it anyway. The crowds would be ahead of us, and we could always turn back if the wind, the cold or the dark got too much. It was a great decision.


The climb is in three parts:
- a long gentle slope up the glacier, that gets increasingly steep towards the rock;
- a "mixed" scramble, which really means loose rock covered in snow - just enough snow that crampons are required, but enough bare rock for continual "nails-on-blackboard" noises (this was Jen's least favourite section), and this leads to the Salle au Manger, the large rock platform where crampons and bags can be left; and
- a 180m rock climb with fixed ropes to the top - around an arete to a corner, then up the corner to a ledge, before the final slab head wall. 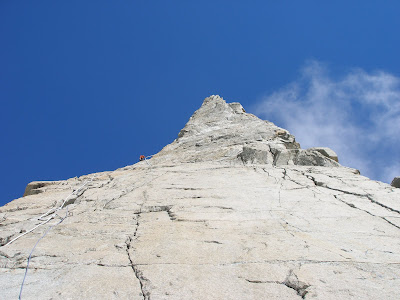 With an Italian party messing around with their ropes at the very top, and a German crew on our tail, we didn't spend too long admiring the view (and probably didn't quite make it to the true summit) before rappelling off, popping the crampons back on and heading back to the tent.

We were back to camp still with light to spare, about 7:00pm, feeling pretty happy that we'd decided to go for it.
Posted by j at 20:36