More ruins? Yep!
By now Mark and I were feeling like we'd seen more than our fair share of brilliant antiquities in Turkey – tombs, castles, old city walls, amphitheatres, bath-houses and more, from the Lycians and the earliest Hellenistic cultures to the Romans, and later the Byzantines and even the Crusaders! Frescoes on hidden churches and underground cities. Polygonal walls. Hilltop fortresses. Tombs carved into the cliffs and scattered across the countryside. Even cities underwater! They were everywhere!
Yet we hadn't even been to Ephesus, the “best preserved classic city in the eastern Mediterranean”. After all we'd already seen, it had better be worth the hype, we thought.
In ancient times, this was an important harbour and pilgrimage site for Artemis, whose temple was just around the corner, but the silt from the rivers clogged the harbour and the sea retreated, cutting off the city from commerce. Over time much of it was buried beneath the fields, and during the last forty years more and more of it has been slowly dug out and propped upright again. 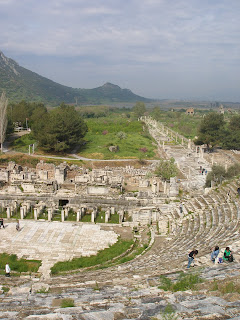 We started by heading to the top of the amphitheatre (the very same that Paul the Apostle famously denounced idol worship; also used for camel wrestling tournaments (!) until a few years ago), for a view of the site, and then down along the marble streets, past the temples, agora, fountains and extremely impressive library.
We stopped in to check out the famous men's loos in time to hear a tourist guide tell his captivated audience that the Romans were more sanitary than we are, as they used communal sponges on a stick rather than toilet paper, but were quite amused when someone asked where the ladies “went” - and apparently, in ancient times, the ladies “didn't”. Likewise, it was frequently repeated that the grand private house on the corner was a brothel … Which it probably was, of course, as at one stage in its history, it might have been owned by a woman – and that's a sure sign it was a den of sin. 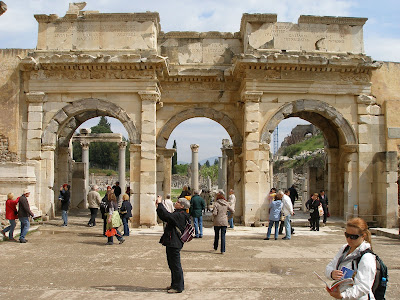 Our trusty LP does say that the site can get crowded with people, but this isn't all a bad thing – if you want to experience what a Roman city was really like, hordes of people moving in different directions and pushing here and there may certainly help. 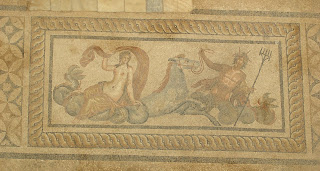 With the arrival of a few drops of rain, we retreated to the terrace houses – the amazingly well preserved houses for the wealthy – to admire their frescoes and mosaics under cover. Definitely worth the extra entrance fee!