We've met a fair number of van people who had a pet along with them for the ride, for company and security. Many rescue a stray dog on their travels – the Dutch and German from Spain, and the Spanish from Turkey – it's just not the done thing to rescue an animal from your own country.

But when we heard strange rustlings outside one evening, we didn't think that we had acquired a little French pet of our very own … it was only on closer inspection of the battery compartment that a selection of leaves, soft rubbishy bits and half-chewed acorns were found. 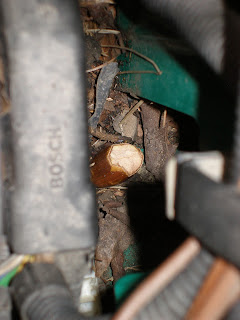 Perhaps we should be thankful that Mousey had acorns rather than decide to chew on any wires, and that the rumblings of the engine scared Mousey out of his / her new home, before we had to issue cruel eviction orders.

Or rather, we think he / she has been scared away .. was that noise coming from outside, or under the bonnet?!
Posted by j at 14:21

Email ThisBlogThis!Share to TwitterShare to FacebookShare to Pinterest
Labels: Dramas, France, Life in the van