So we're in Bolzano, about to catch up with some old mates from Amsterdam.

Being about half an hour early, we parked Fred in a public parking area near the meeting spot and decided to head to the nearby river to sit in the shade and dip our feet in the water. It was stinking hot, well over 30degrees, so we closed all the curtains and wrapped the front of Fred in his shiny, reflector panel.

About 20 minutes later, with much cooler feet, we headed back to Fred. We thought it odd that a small, white car had parked so close on the passenger's side, and that it left in such a hurry when we came back. But as Auste and Vytus had just arrived in their car, we were too busy saying hello again and meeting their friends to think much of it. We made a plan to drive out of the valley and up the hill, where it would be cooler, and do some climbing.

We'd been robbed. Then we saw the busted lock on the sliding door. 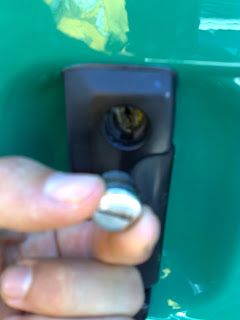 So our time in Bolzano has been spent in a far different way than originally anticipated. The Police have been helpful, but we don't think we'll see our belongings again. Jen's come down with an eye infection and a cold (great timing!), too. We've had the van's door fixed, we've filed Police reports, an insurance claim and started to get replacements for Jen's bank cards, insurance cards and licence. What fun.

If it wasn't for the warm hospitality and company of Auste and Vytus, it would have been a dismal week indeed.
Posted by j at 23:07

Email ThisBlogThis!Share to TwitterShare to FacebookShare to Pinterest
Labels: Dramas, Italy, Life in the van