Four days, three nights of music on top of a hill outside of Bern.
Entry was via a funicular, which neatly separated the sleepy town of Wabern and it's pretty, riverside setting from the noise and mass of people at the festival above. Each day we caught the funicular down in the morning, to pick up lunch of fresh bread, roasted chicken and beer in PET bottles, before heading back up to enjoy it on the gently rolling hills of the festival grounds whilst the bands of the day got started.
The music would start in the early afternoon, and the live acts continued on three stages until 3am or so … then if that wasn't enough, three DJ tents kept the crowd awake until after 5am. (Sad to say, we never quite stayed awake that long … )
It was pretty cool that one of the stages was dedicated to Swiss acts – local bands rather than big, international names. We didn't know any of these, and they were a real mix of styles, but some we really enjoyed.
Even on the main stages there were acts we just hadn't heard of – that's probably more because we haven't listened to any new music in years – and some of them were just great fun. The gorgeous Jamie Callum had everyone laughing, dancing and singing along (as he says, just don't sacrifice beauty for volume), and Aloe Black provided some funky soul on a Sunday afternoon.
It is also true that some of the names we had heard of didn't really excite in live performance - Kate Nash tried hard but obviously wasn't really enjoying herself, Pendulum built the crowd up but took them nowhere and the Arctic Monkeys, the main headliners, suffered consistent technical problems and kept the crowd waiting far too long for the music. Thumbs down!
But these were the minority – most performances were as amazing as we'd hoped. I'd change continents to see 2 Many DJ's do a live set again (if only for the random German covers), or Jamiroquai (were we expecting the jazz band and the three dancing back-up singers?). The Eels showed off their beards, and the Ting Tings had lifted their game since we saw them last year. The Aussie act, Angus and Julia Stone, did us proud with a particularly haunting cover of … “You're the one that I want”, from Grease. Crazy but true.
All up, on the music side of things, this was one awesome festival. 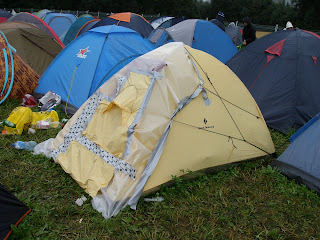 However … here is our tent. Jen's faithful Black Diamond Firstlight that she's both loved and hated since purchasing it six years ago was finally destroyed in the festival campground – on the very first afternoon. We assume someone fell into it, then thought it was funny to rip off the entire side of the tent and then rip that side in half again ... then for good measure, rifle through our bags too (but thankfully find nothing of value to steal - I guess we're now paranoid about these things!)
Security just didn't care and it took a lot of persuasion to get some tape and a sheet of plastic from them, in order to patch it up for the remaining three nights. We did still sleep in it, but on Sunday as the festival finished, when the heavens opened and the field became mud, we left it there. RIP.
Posted by j at 20:51