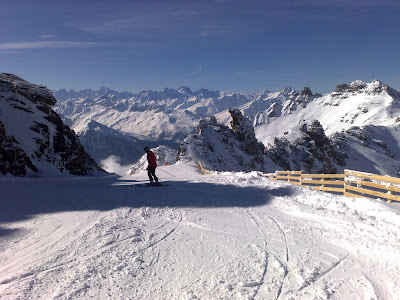 We'd planned ages ago to try to meet up with old mates from Amsterdam in Val Thorens, when they'd be there for a week of skiing and boarding in February - and so we jumped in the van and headed back west.

The Ambers could not have hoped for better snow during their trip! After a month of almost no snow and warm temperatures across the Alps, it bucketed down fresh white stuff ... we couldn't believe what great timing they had. We were super stoked about being able to get out there (and Jen really, really wanted to test her new skis and boots, too). 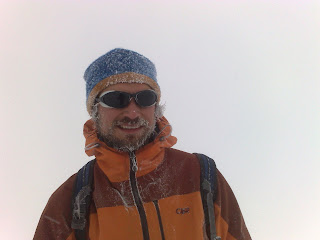 Arriving in Val Thorens, we realised that we'd been misinformed about the campercar situation - meaning we had to park down the hill at Les Menuires (pronounced "Lez Manures" ...?!). We could easily catch chairs up to Val Thorens each day with a ski ticket combining both resorts, but getting down again in the evenings proved to be not so easy. 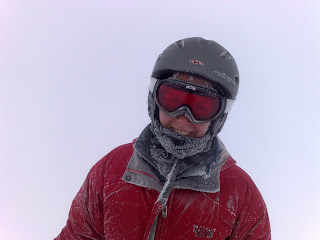 The first night we tried to get a taxi, only to find they were both unavailable and really expensive, so settled for Plan B: ski / board back down the hill. There's a pretty straightforward piste running from Val Thorens down to Les Menuires, but when it's midnight, with no moon, you've had a beer (or two) and you're sharing that narrow piste with a snow groomer - it's a little more exciting. The next two nights we sadly left our mates to their apartments, hot showers, social dinners and drinks before the sun had completely set, because ... well, because we're sensible (and a little boring)!

Anyway, we really enjoyed catching up, having a few runs and hanging out during the day with the Ambers crew - and having snow that great, this winter, was just the icing on the cake.
Posted by j at 19:53

Email ThisBlogThis!Share to TwitterShare to FacebookShare to Pinterest
Labels: France, Skiing and Snowboarding