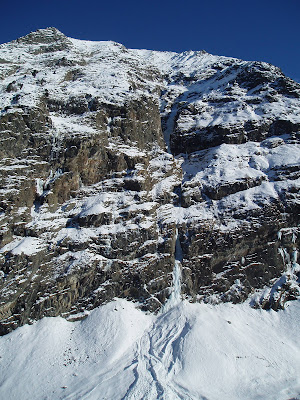 We started the day early, hoping to jump on this line - Cold Couloir. Every day we've seen it in the valley, it's been busy ... but it looks spectacular. 600m long, if you go all the way to the top, but most people only climb the first (and best) 7 pitches of WI4+. Not for us today, however! Two parties had woken before us and we didn't feel like waiting around behind them, catching all the ice they drop. 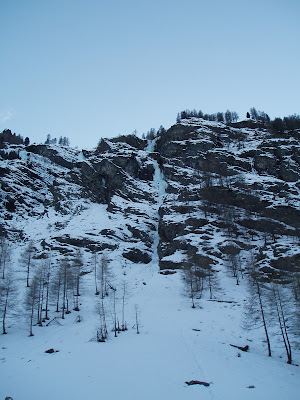 Not as spectacular in the photo, perhaps - but it turned out to be a fantastic climb and we had a really great day out. A few steeper sections, broken up by easy ground; and although we weren't alone on the route (this is Cogne in high season, after all!), we were first and could keep ahead of the friendly Belgiums and French guys behind us. 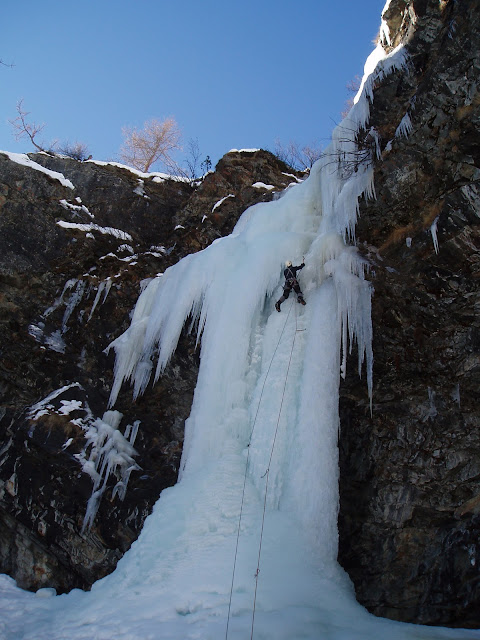 It was beautiful to look at and fun to climb. Steep and sustained with all variety of ice shapes. OK, one section was a bit wet - so we were climbing through a shower that froze when it hit you - and some of the ice was a bit thin and patchy, requiring lots of attention to climb.

All up, though - we got to the tree in the sun at the top and congratulated ourselves on a really great day out.

(On a side note ... we found out just as we'd rappelled off that someone had fallen on this last pitch, injuring their ankle. We re-climbed the first pitch of the route, to rig a rappel line for them, and met him and his friends as they came down. More shaken up than seriously hurt, but with a limp and obviously in a lot of pain. We hope he's doing OK and is back on the ice soon!)
Posted by j at 19:04