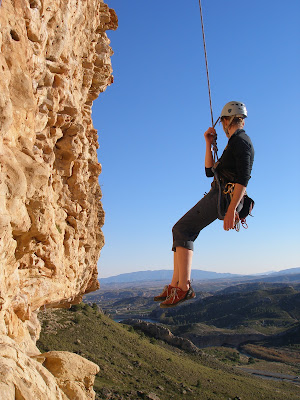 We'd printed out the online topo to this area a while back, knowing we'd pass back through the area. And sure enough, on our way back north we decided to drop in on Ferrari wall.

OK, so we got a bit lost trying to find the place (I wouldn't recommend taking the online map too literally) but we got there in the end and camped up overnight under the marked pine tree. And woke the next day to blue cloudless skies and a strong, extremely cold wind. Breakfast was slow as we lingered in the warmth of the van.

When we did venture out, it was a short walk to the cliff edge - and once over the edge, we were out of the wind and in the direct sun. The rock was warm to touch, so the layers of clothing were stripped off and it was climbing time. 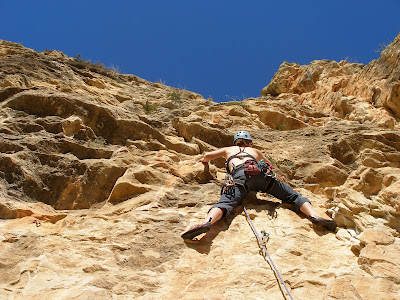 We both had fun on the overhanging, jug-filled rock - deceptively tricky in parts - and so much so, we decided to spend another night there and climb there again in the morning. Jen worked a steep 6a, and Mark a 7a ... as well as trying that line under the roof, too.

The online topo we used, again, is not something to be taken too literally, showing many more climbing lines than currently exist - it must have been quite crowded intially, and now the routes have been re-drawn, re-bolted and clarified. Whilst this means the routes are better spaced, it does sometimes mean you end up climbing something harder (they're never easier!) than expected.

It's also very much a local's crag; I think we were quite unusual, not being from that province let alone anywhere in Spain. It won't be an internationally famous climbing destination any time soon, but it was definitely worth the visit!
Posted by j at 22:01