We arrived here on the Saturday night of a long weekend ... and quickly realised that free camping in your campervan in the carpark, up near the castle, was de rigueur. The place was packed with local and international climbers, most of whom seemed to be sleeping in their vans - just like us! 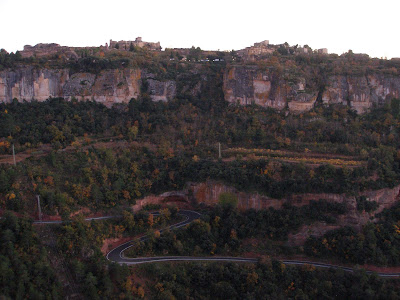 Perched on the top of the cliff, Siurana is a very pretty and very tiny town and one of the last places to be "reconquered" from the Moors - the remains of the castle are still there. It's got a climber-friendly campsite, a shop selling local wines and olive oils, a fancy restaurant and B&B, and that's about it.

It has also got a lot of pretty spectacular vertical climbing, on limestone that almost looks like Blue Mountains sandstone ... 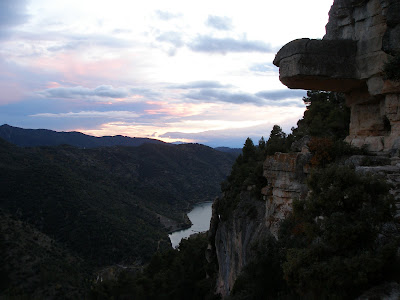 ... well, if you look at it in the right light and squint a bit. 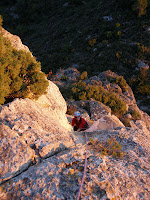 We had great weather and soon settled into a pattern of waking up late, having a lazy breakfast, before wandering to the crag and climbing until the sun set - then dinner and beers. It was a pattern that was hard to break!

We did one quite average multi-pitch - the first pitch was great, but after that the rock quality deteriorated - so concentrated mainly on pushing our limits on single pitch, sports routes and enjoying the views to the valley below. 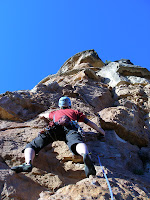 The only downside with Siurana? Most of the climbs here are hard. Jen felt very chuffed by onsighting a bunch of 6a's (and leading one overhanging 6a+ with "only a few" rests ...) and while Mark was a bit more in his element, he still got spat off a few routes. Although we're both improving by all this climbing we're doing, if we could climb a few grades harder, we'd probably still be there months and months later ... 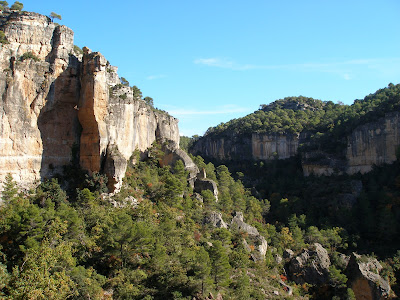