Ah, Pericondrio Tragal!
This is apparently the mega-classic of Montanejos; a route that must be done if you're in the area.

Sadly, many people have passed through Montanejos and have also felt it essential to climb ... and the passage of so many palms and soles has polished up the rock on the first pitch, making it a little more intimidating than the grade would suggest. Nevertheless, Mark lead this and then Jen did the second pitch, and we were at the trees.

The guidebook tells us not to be tempted to leave the route there - and it's good advice. The best pitch is certainly the third as the route traverses far out onto the face of the enormous upside-down triangle - with views down into the blue water of narrow gorge. This was delicate climbing, requiring good balance to move feets and hands from one weakness in the cliff's face to the next - although when most needed, a jug to grab or a decent ledge to stand on (thankfully!) appeared. And although these jugs and ledges ensured it was not particularly tough climbing, the placing of bolts was far from generous - ensuring excitement for the leader (Mark - who of course stayed cool) and the second (Jen - who found it terrifying and spent most of it believing she was about to drop and swing).

And then it was a matter of a quickly heading up the fourth and final pitch (great moves on solid rock - Jen's lead), before the abseil descent.

A route that was definitely worth persevering through the start! But the "mega-classic of Montanejos"? Well, we thought that a route in another area of the region deserved that title ... but that's a post for another day. 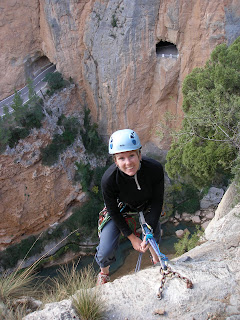