The famous Alhambra and a culture of free tapas with your drink?
A small university city surrounded by snow-covered mountains?
Granada really is quite easy to love. 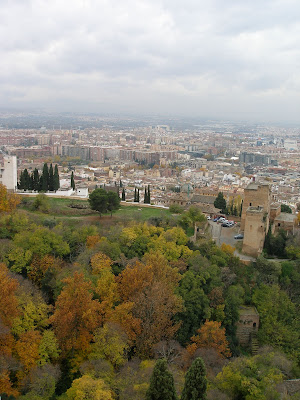 And being someone's birthday, it was also a good excuse to celebrate.
We woke up in our hotel (second and third nights not in Fred for over a month; feels quite strange), and headed up the hill to the famous Alhambra.

This is a complex of fortress and palaces, and town supporting these, dating mainly from the times of the Islamic sultans (13th century) and taken over when the Christians "reconquered" in the 15th century.


Lately it's risen to fame again as Romantic authors in the 19th century, such as Washington Irving (who is considered akin to a god in these parts), wrote about their beauty, and the mystery and allure of the court of the sultans – and tourism, and along with conservation and restoration, followed.

The main palace, the Nasrid Palace, is truly stunning; from the fountains and pools, to the corridors and courtyards … and of course, the most intricate decoration carved into the walls and ceilings.


It's hard to describe in words what it is like to move between the airy chambers, as I am no Romantic poet, but each (and there were many) had a timeless elegance, a unique design and atmosphere and decoration that, whilst intricate, was never overpowering.
And it doesn't end with the Nasrid Palace, either – there are also the battlements and fortifications, the Moorish baths, the Charles V Palace … and, not to be forgotten, the extensive gardens and the summer palace of the Generalife.

In the afternoon? We decided to indulge in more local culture, and headed to an Arabic bathhouse … for two hours of soaking in hot and cold pools, followed by a massage. Very indulgent and extremely relaxing – perfect!

Being Friday (and of course, someone's birthday), we hit the town that night – delighted to discover that tapas is free with your drink, and with the size of the portions, it wasn't hard to have a full meal just by ordering a few beers or wines. Despite a steady drizzle of rain and cold temperatures, the bars and restaurants were packed with mainly locals also enjoying a night out and it was the wee small hours before we decided we'd had enough jamon iberico with our wines …
Posted by j at 00:00