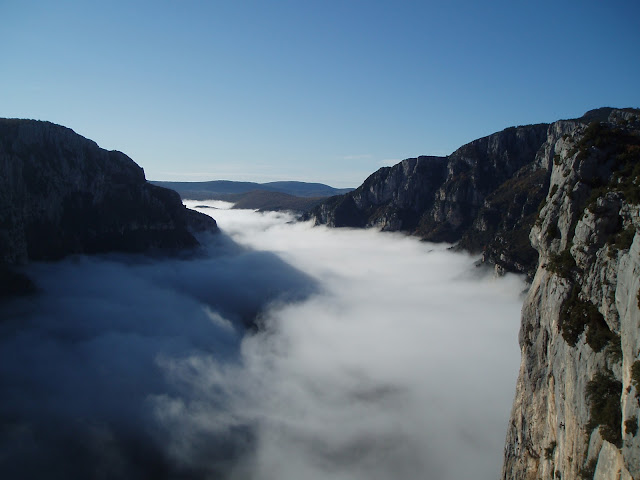 At last, the forecast was for something other than rain. It was time to leave our campsite haven, with its superb internet, and head to a crag.

Taking a chance that it would be warm and dry enough, we headed towards Verdon Gorge – a place Mark has been itching to get to for quite some time. Verdon is a deep limestone gorge, famous for long routes approached from above – rappel in, and climb out. (And if you can't climb out? Well... you're stuck half-way up a massive cliff, aren't you?!)

The first day there was spent either watching the rain come down or, in the breaks in the weather, checking out the soaked slabs and the intimidating drop to the roaring river a long way below. Jen was sceptical that any climbing would be done.

Oh ye of little faith! The next morning dawned clear and sunny with a light breeze - and whilst still cool with some seeping patches on the rock, the slabs were dry. It was finally time to climb. 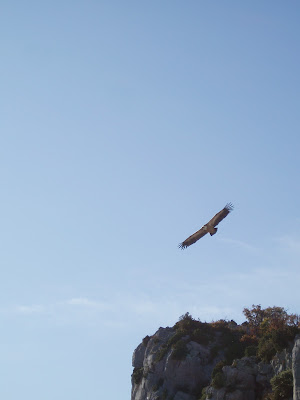 First impressions? Let's be honest. Jen didn't like it at all, and Mark was less impressed than he'd hoped too. We chose to climb single pitch routes – a single rappel down to an anchor, before climbing out. If it wasn't for the position on the gorge walls, high above the river below with the vultures circling around, they surely wouldn't get as many stars as they do – some loose rock, some polish and only a few funky moves. And quite frankly, you get that view from the balcony above with the rest of the tourists.

The day was redeemed by two routes – Wide Is Love, with its precarious hanging belay and disappearing foot-holds, and Biscuit Margarine, that once again started out in a tenuous position and climbed up to safety.

Perhaps we had just picked the wrong lines.

So the next day we tried something harder – a 2-star, 5 pitch, 6a+ charmingly called Les deux doigts dans le nez. And it was a lot harder, and more effort for us than the grade would normally suggest and still a contrived line, weaving left and right to pick out the most solid rock in a wall of choss – great scenery not withstanding. Two fingers in the nose indeed.
Jen, feeling overwhelmed, picked the next day's outing, choosing Cocoluche – disparaged by our guidebook as being one of the most popular multi-pitch outings for no good reason. We actually really enjoyed it - although it was the weekend, it wasn't at all busy, and the optional harder penultimate pitch provided a welcome challenge.

Next, we headed to a different part of the gorge to the Arete du Belvedere – and despite it's three stars, we were in for another disappointing route. With inconsistent grading, it rambled up the arete to a scrubby finish: have a few of the top pitches crumbled away?

But in good news – every day brought clear blue skies, and in the sun at least, it was warm. The days are getting shorter, and the nights are crisp and cold, but with the sun on your back and reflecting off the cliffs, it was easy to forget that it's late November. We've seen a few other teams of climbers, but most of the time it feels as if we have the place to ourselves. In the scrub, we've heard wild piggies and seen deer and a fox; and of course, overhead, the vultures keep playing in the thermal updraughts. Oh, and there was the mouse too … but more of that later!

With continuing good weather, and many more routes to chose from, there was no question of us moving on just yet …
Posted by j at 14:14