"THE major classic, it should be on the itinerary of any serious climber who visits the Verdon.”

Twelve pitches. 320 metres. Right from the bottom to the top of the gorge.

This route is a mega-classic in the genuine sense of the word: it was the first route climbed on this side of the gorge, by Joel Coqueugniot and Francois Guillot in 1968. This was back before rappel-bolting, with the ascents done from the ground up, before modern climbing gear, ropes and shoes. The route may have gained some fixed protection in recent years, but its history was intimidating – not to mention its length and popularity. Despite its moderate grade, to climb La Demande would call for a strenuous effort.

We set off as the sun started to hit the rock, and headed down the four rappels to the Jardin des Ecureuils. A short scramble lead us to three more rappels, and we were in the scrub at the bottom of the gorge. Bashing through this, following whichever pig-path seemed the widest, we arrived at the rather uninspiring base of our route.

We'd been advised not to judge the route from the first three pitches; as more parties start out on these than finish the route in its entirety, they are more polished. They're also not what the route is famous for! Linking a couple of these pitches together, we were soon happy to be half-way up the cliff – 6 pitches and about 160 metres of climbing done.

But we were not at all half-way through the climb in terms of effort required! A fun, but delicate and strenuous, pitch followed, as the route lead us into the wide fissure that forms the top of the route. One more easier section, and we were at the two crux pitches: the so-called “fearsome upper chimneys”.

As a rule, climbers these days don't climb chimneys. The rock is generally softer; that's why there's a massive split in the cliff in the first place. They collect water, moss, vulture droppings and other mess from above, and no-one likes to get wet and grubby. Even with all the fancy modern climbing gear, they can be hard to protect too – although old-school climbers will no doubt tell you that once you're jammed into a chimney, you can't fall out… so why would you need protection anyway? Aside from for your mental health, that is?
So, whilst this chimney was mostly dry and solid, the motions used to climb a chimney feel strange and strenuous to us: bridging the distance with feet and hands on either side, using the friction of feet on one side and bum on the other to shuffle your way up, and generally thrutching, puffing, panting and praying until something like a hand- or foot-hold appears. It's also not very dignified. In parts, the right-hand wall has been polished to a light shine by the passage of so many backs and bottoms: it's comforting to know that you are not the first person to use more body parts than hands and feet on this part of the route.

Thankfully too, a few extra bolts have been placed on these two pitches – certainly not nearly enough to aid from one to the next, or to prevent the leader from feeling like he's going to slam into the belayer if he pops off, but reassuring nonetheless.

And with part of your body on the the left, and part on the right, the climber looks straight down the middle to the river in the gorge, far, far below. Even though we were in a chimney, it feels fantastically exposed! 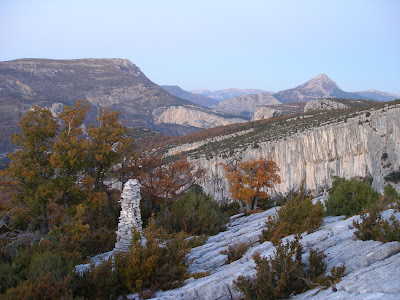 With sighs of relief, we reached the penultimate belay – the sun was dipping lower and the temperature was already dropping. The days are short in November! The last pitch was a bit of a tired ramble, but we were then at the top – just as the sun lit up the neighbouring cliffs before disappearing for the day.
Posted by j at 20:23