Mark had wanted to do this route since hearing about it before our trip last year … and with it in good condition, there were no more excuses to stay away!

We headed up the Aiguille du Midi cable car to the midway point the afternoon beforehand, and set up an outdoor bivvy on top of the moraine wall. After a few games of cards, and well before sunset, we called it a night and tried to get some sleep – we would need all the rest we could get the next day! True to form, Jen managed to drop off fairly quickly. 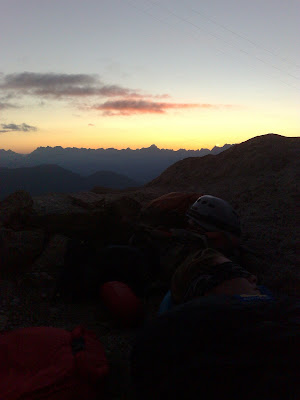 The alarm went off the next day at 1:30am. Ouch. We had a pain au chocolat, stowed our sleeping bags and mats under a rock and hit the path. Despite the (almost) full moon, we were glad to have sussed out the moraine route the day before and we were quickly on the ice ramp leading to the start of the route.

Once up the ice ramp, the crampons came off and the scrambling began. Route finding in the dark isn't exactly easy, but all in all, we were pretty happy with the path we took and never really strayed from what the description said we'd find.

Approaching a steeper section, we switched to rock boots – whilst this meant we had to carry our heavy boots, it made us more confident on the rock so we could move a bit faster. We were constantly concerned about our speed – above the rock, the icy ramp would soon be getting the morning sun …


We topped out of the rock about 10:30am – we'd already been on the move for 8 ½ hours! - and after a brief break to change back to the heavy boots and put on the crampons, it was time to take our steps onto the snow ridge.

Although it looks flat from here, it's really not flat. 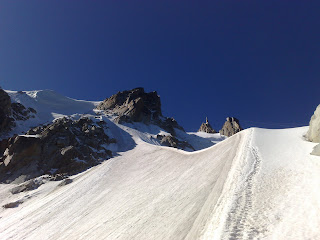 This is a better picture of what it's like! 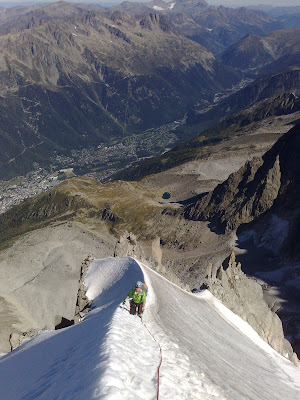 We were glad to have two snow stakes to protect the narrow ridge, but still moved slowly and cautiously – this is not the place to slip. And when the ridge steepened into an icy wall, Mark got some ice-screws in too: this was more familiar and comfortable ground! It's been a while since winter, so the arms and calves complained a little, but the motions of ice-climbing have not been forgotten.

Stuck behind two friendly (but slooooow) British guys, we pitched out the top - moving to the left of the last rocky rognon up steep but stepped-out ice, which was conveniently close enough to the rock to allow Mark to put in some rock pro too. Jen finally cheered up a little, having spent most of the morning grumpy and terrified … it had been a long morning of climbing, and a bit of lose rock at the start plus the break in her beauty sleep had done nothing for her mood.

Nevertheless, we eventually topped out over the ridge … and see? Jen is even smiling. (Pure relief?) 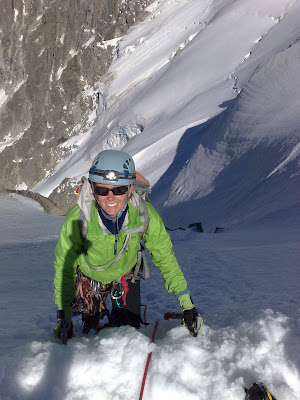 And thankfully, the descent did not involve 16+ abseils (we should tell you about Dent du Requin one day!) but rather two cable cars, packed with tourists, and a great view back over our route. We stopped at the half-way point for a drink and to collect the bivvy gear, and congratulated ourselves on a great (if long) day out. 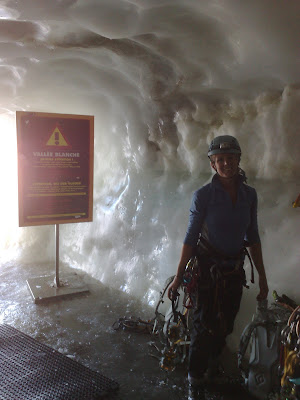