We don't really have good luck with the weather in Chamonix! Last year when we first arrived it was the same story … rain, rain and more rain, but then it was warm temperatures. This year, there's loads of rain but cooler temperatures and a lower snow level. So whilst last year the snow and ice wasn't there to climb, this year there's too much of it and it's unstable, perched ready to fall.
So once again we've been doing the usual Chamonix rainy day activities. We went shopping for a new tent (no luck in Chamonix itself – apparently the gear shops there only sell fashion, so we headed down the road to Au Vieux Campeur), had the “Menu du jour” for lunch a couple of times and sat around in the guide's office looking at maps and hoping things would improve soon.
Seeing a gap in the clouds for the 25th and 26th July, we decided to make the most of it and head towards one of the guides' recommended routes: the Table du Roc ridge, on Aiguille du Tour.
First we hiked up to Albert Premier hut, in light snow and a bit of rain, and set up our new tent out the back – there we met a bunch of English climbers who were planning on doing the same route.
However, when the alarm clock went off hideously early and it was time to climb, Mark was in no shape to get out of his sleeping bag. A sore throat and feeling a little dead saw the end of our plans to climb that day. Instead, at the much more sensible hour of 9am, we headed out for a gentle stroll along the glacier, aiming for the Col du Tour. Annoyingly the clouds rolled in the entire time we were up on the Col, obscuring the view, but it was good to stretch the legs and get used to a bit of altitude.
We became a bit worried on our return, however … we hadn't seen the English guys on the glacier and they hadn't returned to their tents. It started to get late, and when the clouds started to roll in we saw the first helicopter come out of the valley and hover over the Table du Roc. It didn't stick around, though, and soon flew off – was this a training exercise, or was it too cloudy to rescue someone up on the ridge?
We found out a bit later, when another chopper was heard … and watched from the hut along with all the other guests as 6 people were hoisted from near the top of the ridge, and dropped back down onto the glacier. When the boys returned to their tents, they explained that there was just too much snow – and just too much soft, unstable snow – on the route. They got into a position where they could not get across to the summit and down the normal route, and they could not get down the way they came. It had been a long and tiring day for them, and they were quite embarrassed by the fuss of the helicopters – but grateful to no longer be on the mountainside. We were pretty glad we had not decided to do that route after all!
Anyway, the weather was going to be good the next day and Mark was feeling better, so we decided to head up Aiguille du Tour by the normal route – not up the ridge! - going across the glacier, up the col we'd been at that day, then around the corner to the rocky summit.
We set the alarm for a bit before 6am, and were on our way by 6:20. And without any dramas, by 9:15 we were sharing the summit and it's view of the surrounding peaks with a large group of Spaniards. After making a birthday phone call, we easily headed back to the tent to pack up and wander down the hill. 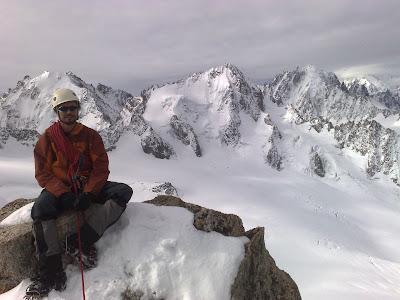 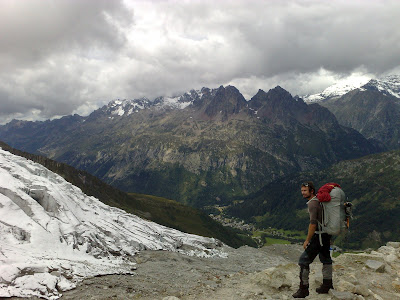 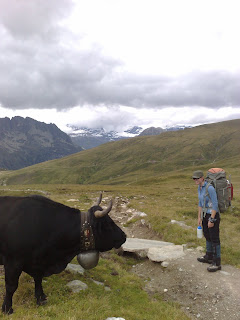 Then the next afternoon, the rain started again …
Posted by j at 16:56