We cracked and headed north. All that sun, so little snow and ice - lets go find some rock!

Well, we found the rock in the Frankenjura, just north of Nuremberg in Bavaria (well, Franconia really). And it was wet and cold, and extremely unappealing. With so much quality rock around there we're sure we could have found something fun (ie dry) to climb, but we're fair weather climbers - heavy mist and grey skies and temperatures only just above zero don't really work for us, and the shop selling the guidebook is only open on Saturdays. Where had the sun gone?!


But hey, we were in the area famous for having the world's highest concentration of breweries. As well as a number medieval towns and cities to wander around.

We started in Bamberg, home to rauchbier - smoked beer - which comes in a variety of styles, all brewed in this city. We liked the Schlenkerla the best - and it tastes even better from the keg at the brewery itself.

Then we headed to the tourist trap that is Rothenburg ob der Tauber, sampling their sweet pastries called "Snowballs" - a little dry, but not bad at all when covered in chocolate - and walking around their covered city walls. They've got a great museum of jurisprudence and criminality, showcasing medieval punishments, torture implements and, for the lawyers, the legal regime and process. 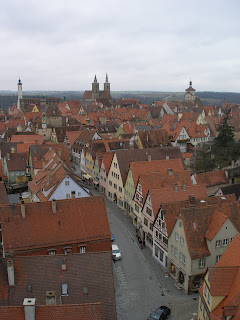 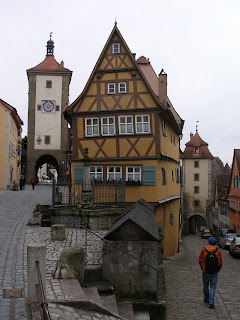 And lastly, we popped into Nurenberg and were very well received with a guided tour by Katya, including local beers and food too. It was great to catch up with Katya (big thanks for meeting up with us after your holiday on short notice!). And we also  checked out the fabulous German National Museum and the Documentation Centre at the old Nazi rally grounds, and now feel appropriately cultured and learned (but perhaps a little museum'ed-out!).


For now, we're just outside Munich, once again enjoying the hospitality of our friends Rhona and Brett and delaying the decision of "where to next ...?!" for a little longer.