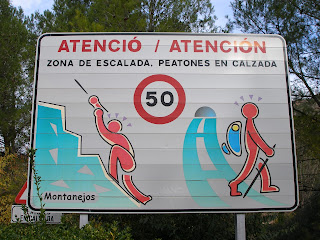 With a series of springs pouring out 25degree water right near town, and with more than 1400 routes, Montanejos seemed pretty perfect! 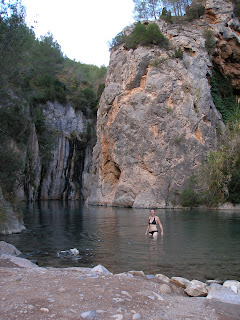 We also thought that it would be a great place to have a break from free camping, as there is meant to be a climbers' refuge there ... however, the place has been renovated and the price had dramatically increased. And so the climbers have disappeared, too.

So after one night there, we moved to the free camping spot across the road and under the bridge. Hey, with hot springs in town, who needs hot showers anyway?!


On that note, though - the air temperature wasn't really conducive to spending too long in a 25degree river. Once in the water, it was hard to get out - and we were wandering around more often than not in our down jackets, and climbing in thermal tops at least.


We spent a couple of days cragging, before hitting up some longer routes - but we'll post more about them later! We were pretty impressed by the diversity and sheer number of the routes - grades for all abilities, and single pitch crags to adventurous multipitches, and even a little bit of trad (although we stuck to the bolted ones this time!).
Posted by j at 22:33