Our initial impressions regarding the population of the Costa Blanca were not wrong.
This was clearly proven by the local cuisine:


But once you acknowledge that, like Gibraltar, the Costa Blanca isn't really part of Spain - you can really begin to enjoy it. And the climbing opportunities are extensive and varied - in both scope and quality, too.

We were at first hampered by a bit of bad weather and our need for a rest day, and lingered lazily at the Orange House (which really was a great place to stay, having a lounge like home and loads of recommendations and advice from its staff and residents). And our next excuse is the constant need to drive to the crag - which meant packing Fred up every day - and so we were consistently later on the crag than expected.

Our first route on our first day climbing, at Sierra de Toix, had both dodgy rock and dodgy bolts, too - but thankfully the area redeemed itself in the afternoon, catching all the sun that was going in a natural amphitheatre, on a hill over looking the sea. Apparently near by there is a newly developed sea cliff, the Pirates of the Caribbean area ... we've saved it for later!

The next day we headed to Echo Valley, a crag with great atmosphere, but again soft and loose rock ... making the five pitch route we chose, Through the Looking Glass, a bit more exciting for us than anticipated - although it was a great opportunity to use the trad rack, and the views were magnificent.

Then Jen twisted her shoulder somehow, and so in the interests of avoiding large amounts of pain, exchanged climbing for Voltaren and rest. As Mark now had a willing belayer, he took the opportunity to go on a sending spree. He started at the Monsters of Rock wall, working left to right and proving that not all 7a's are created equal, and then he headed up to Olta to be photographed on Tai Chi (it's compulsory) ... 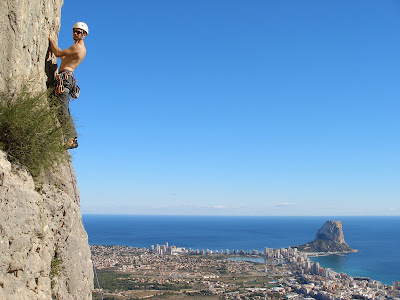 ... although he enjoyed the less-photogenic line of Tufa Groove more. 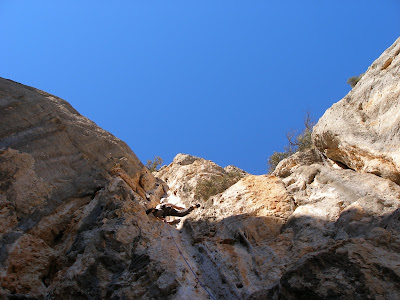 Mark even headed all the way up the pot-holed road to Bernia, just to have a crack at the thin tufa line of the Magic Flute ... We even set up the camera to record his onsight attempt (but, um, that's another story and no, you won't be seeing the footage!)

We've certainly left behind a lot of fantastic climbing in this area (Jen in particular ...), and we can definitely see ourselves returning. There's not only the Pirates of the Caribbean area, but routes on the Penon and the entirety of Sella that we've not yet been able to touch. Until next time!
Posted by j at 17:38