Food and drink and more food ... and maybe just one more drink, too

After living like monks in Montserrat (when in Rome, etc), it was time for some hedonism. You can read this as "a shower (preferably hot) and a meal cooked by someone else (preferably several courses)". Crazy stuff, we know. 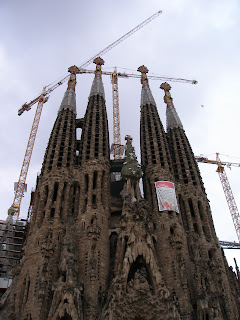 We left Fred by a small train station about an hour outside of the city and caught the train in, as theft of all varieties is meant to be rife and we didn't want to risk all our climbing gear or Fred himself - this also meant that we had a night without Fred. (He didn't miss us at all.) We slept instead in a grubby but very cheap pensione in the centre of Barri Gothic, that satisfied our requirements for being secure, having hot water and being in a great location.

Lunches were a Barcelona highlight. E10 lunch menus are everywhere - and they include at least two courses, a drink (wine or beer or whatever) and even a coffee. Bargain! And the highlight of the highlight? Chocolate and raspberry mud cake, served with balsamic vinegar icecream. Yes, it worked. Yum.


We also got some culture. We saw the Segrada de Familia before it was declared a proper church on 7 November, and were grateful to have paid a few Euros extra for a guided tour - which was extremely informative and, as there were only 3 people on it including us, enabled us to ask all our silly questions.


(On a side note, thankfully we missed the chaos that is El Papa in town!)

And we went to the Museum of the History of Barcelona ... which is underneath Barri Gothic, and goes under the city to the excavated remnants of Roman Barcelona (being cheifly a bit of city wall, a dye factory and a fish sauce factory ... we're guessing it was a smelly part of town).

Of course, we also went out on a tapas-bar-crawl. Starting with pulpo and beers, and ending with ... well, let's just say a lot of delicious snacks, frosty beverages and smooth reds many hours later. Highly recommended.
Posted by j at 20:26